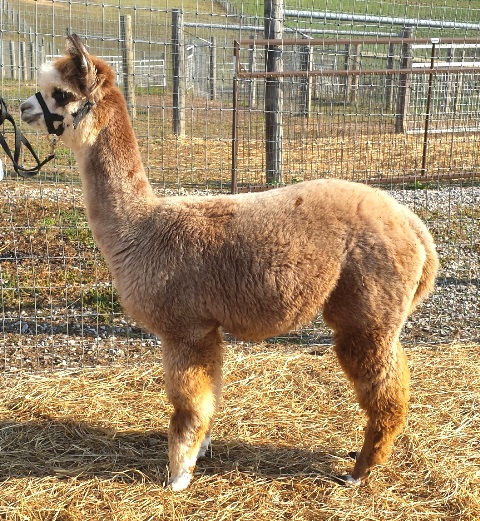 Herd Sire Proof is in the Prodigy!

He's THE BOMB!! AS OF MAY 2019, BOMBER KIDS HAVE GARNERED 46 BANNERS!!! AND THE GRAND KIDS HAVE ENTERED THE RACE, WITH TWO THIS YEAR SO FAR!

Bomber's sire, Aussie .38 Special, is one of the premier grey herd sires in the US. Bomber is the best of the next generation.

Bomber's show career started off with a bang. He stepped into the ring at his first show at the A-OK Blast Off, and won his first COLOR CHAMPIONSHIP!

After that there was no stopping him ...

He wowed the judges at AOBA Nationals 2011 in Denver, and was awarded the COLOR CHAMPIONSHIP! His fleece was compared in quality to elite whites.

Now retired from the show ring, he was truly a formidable contender.

And the wins continue ... his kids are in the ring... at 2016 Futurity, his daughter, Avery was CC and Judge's Choice, his son, Dauntless was CC at Nationals, at 2015 GWAS his daughter was grey CC, his son was grey CC and another daughter was RCC in brown. These kudos were added to those of his East Coast progeny.

Championships.... they're the family business!


Fine, silky, gorgeous fleece on this beauty! March 2015, delivered a knockout rose gray Bomber boy, Callie's Ripken. Callie has outstanding presence, and her coverage is superb. She is a delight to have in the herd, easy to handle, and a no-nonsense breeder/birther.

Sold
Ask a question
Details
Certificate Histogram
With any Herd Sire the PROOF IS IN THE PRODIGY!
We now have 3 years of Ripken's crias and they were all fantastic, actually even better than we expected. The grey colors have been beautiful, confirmation always spot on, great personalities and success in the show ring with a Reserve Championship in her first show!
Last season Ripken produced Khaleesi, a LRG girl with AFD 17.2 and SD 3.7 microns. We are a small farm so we rarely repeat a breeding but in this case we repeated almost all of them and added some besides. The crias were just that good. More results are coming in from excited clients who also have great Ripken babies!
Our friends at 3 Springs Alpacas say their Ripken offspring is the best girl on their farm! "Our shearer singled her out for her great fleece, something he rarely does".

Ripken's sire Bea-2-Bomber is a LRG 9 time champion including back to back AOA National Color Championships in 2011 & 2012 with his fleece also winning a Reserve Championship.
As of September 2017, Bomber's offspring have won 37 banners. He is the next generation of elite alpacas from his sire, Aussie .38 Special.
Ripken's dam Callie is also from Championship stock Michelangelo, who demands a $7,500 stud fee. For those discerning breeders, you will appreciate Michelangelo's fleece statistics: AFD 16.3 micron and a skin biopsy of S/P Ratio of 13.28/1 and follicle density of an amazing 107 follicles per sq/mm!
Ripken's offspring have been spectacular inheriting his grey color and fleece characters as demonstrated by one even earning a reserve championship in her first show. Most notably besides producing grey, Ripkin always adds amazingly long staple length to each of his offspring.
If you are looking for a herd sire to make grey and improve on your girls, I am confident Ripken will not let you down.
Ripken is proudly co-owned with Amore' Alpacas
Purchase Terms 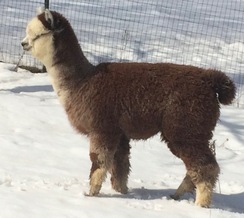 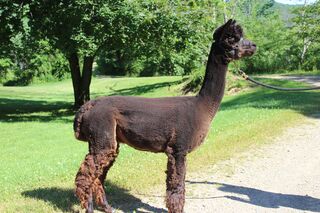 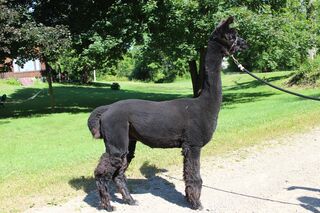